Is the US Headed for a Recession?

After stellar economic growth in 2021, the US economy declined 1.4% in the first quarter of 20221. This was the first contraction of the economy since the beginning of the economic recovery in 2020. The S&P 500 is down 12.9%2﻿ for the year through April 2022 and is off to its third-worst start in history. Bonds using the Bloomberg US Aggregate Bond Index, are also down -9.5%3.

This performance is largely due to record high inflation, with all eyes focused on the Federal Reserve (Fed). Investors are concerned that the Fed may not be able to tame inflation without causing economic damage. This concern has led investors to worry that a major recession is right around the corner. While it’s true that the potential for a recession is greater, it is far from a foregone conclusion. This edition takes a look at some of the reasons why the risk of a recession, while possible, remains low in 2022.

Looking beyond the headline numbers, the story is mixed. For the quarter, the US was hurt by a sharp drop in exports due to supply chain disruptions and decreased government spending. Yet at the same time, consumer and business spending increased. It’s clear that economic growth is slowing as the post-pandemic stimulus fades; however, underlying growth trends, as evidenced by continued consumer spending and business investments, show the economic engine has not yet run out of steam4﻿.

Additionally, there are several other reasons the US economic outlook may be brighter than some suspect.

First, the consumer remains healthy. Consumers have accumulated more than $2 trillion in excess savings during the pandemic5. In addition, the household debt service ratio, which is the percent of after-tax income used to make payments on mortgages and other debt, remains at a 40-year low6﻿. High savings and low debt servicing costs support continued consumer spending, which drives 70% of US economic growth.

Second, inflation takes a smaller bite out of consumer spending today relative to history. It’s true that higher gas and grocery prices leave less for consumers to spend on other items. The current trend in energy prices is estimated to deliver a $200 billion hit to consumption for the year7. However, while the hit is meaningful, it pales in comparison to $2 trillion US consumers have collected in excess savings. Finally, thanks to more fuel-efficient vehicles, spending on gasoline has declined 60% as a share of a consumer’s total wallet during the past four decades.

Third, the job market remains resilient. Job openings currently sit at 11.5 million, while the number of unemployed is approximately 5.9 million. In other words, there are roughly 5.6 million excess jobs8﻿. This imbalance in the job market has led to wage increases and ultimately adds to inflationary pressure; However, to date it has not derailed corporate profit margins.

High Inflation, the war in Ukraine, rising mortgage rates and falling portfolio values have all impacted consumer sentiment, which measures how consumers view both their own financial situation and the general state of the economy. However, history shows how consumers feel about the economy does not necessarily correlate with future stock returns, as seen in the chart. Interestingly, when consumer confidence bottoms, it tends to precede stellar equity returns, while peaks in sentiment don't see as much upside10. Hence, using how consumers feel about the economy to make large changes in portfolios can be a risky investment strategy.

Recessions are the inevitable end to all economic cycles. There are clear signs the economy is starting to slow after record growth, but slowing is not stalling, and the economic outlook may be brighter than how consumers feel. For investors, having a plan that can withstand a wide range of environments—including an eventual contraction—is far more important than predicting the start and end of the next recession. 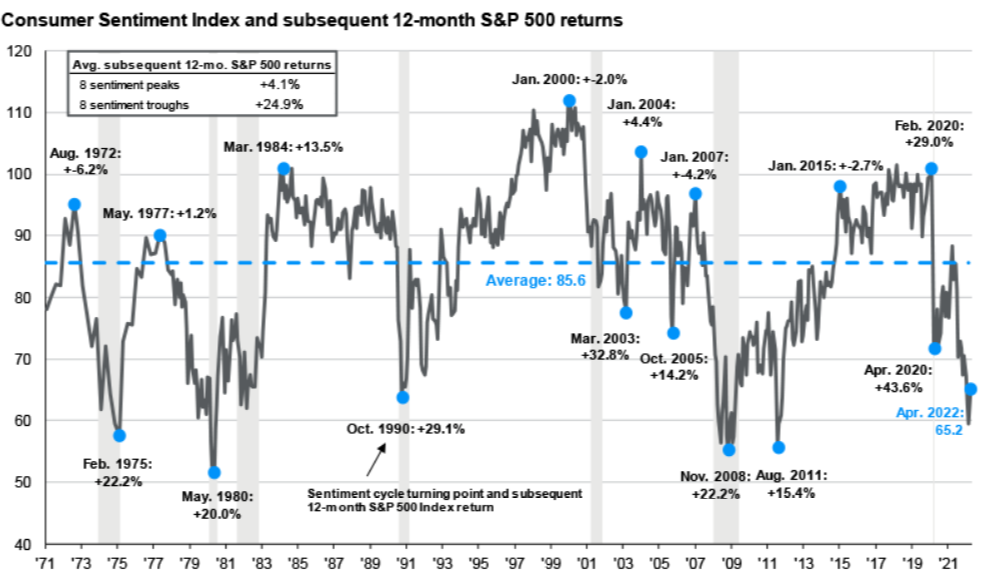 1﻿ US Bureau of Economic Analysis.